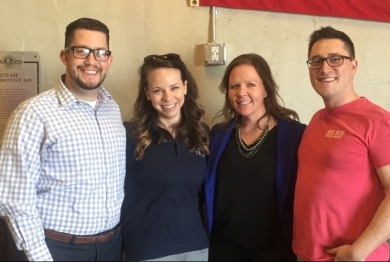 COOKEVILLE, Tenn. – One thousand, four hundreds miles, 76 breweries, 21 days, and one mini-bus; all the makings of a successful Tennessee Beer Run, yet one stop stands out most among the hops in the Upper Cumberland’s hub city. After the unveiling of Red Silo Brewing Company a mere 6 months ago, Friday’s visit and feature from the Tennessee Beer Run offered Cookeville’s first brewery even further clout as a craft beer destination.

Zack Roskop, owner of Knox Brew Tours in Knoxville, Tenn., is leading the charge along with Tennessee Craft Beer Magazine, to provide knowledge and enthusiasm among craft beer lovers in highlighting the work being done by brewers across the volunteer state.

Representatives from the Cookeville-Putnam County Visitors’ Bureau and the Tennessee Department of Tourist Development were on-hand to join the Red Silo team in welcoming Roskop and his brew crew to town. Each brew crew member was served a tasting of Cookeville crafts in signature pint glasses, a gift from the visitors’ bureau, and available at cookevillereserve.com.

Roskop and crew toured the brewery and interviewed the Red Silo team as well as patrons in order to learn more about what makes Red Silo Brewing Company such a hot spot among locals and visitors alike.

“Red Silo offers a desirable experience that we can market to our guests and potential guests,” said Zach Ledbetter, vice president of visitor development, Cookeville-Putnam County Visitors Bureau. “Travelers want to go where the locals go, experience the culture and the atmosphere of the ‘mom ‘n’ pop’s,’ and enjoy the flavors of something locally made and hand-crafted.”

“From a state perspective, we love when ‘made in Tennessee’ products are highlighted,” said Sara Beth Urban, Middle Tennessee division manager, Tennessee Department of Tourist Development. “Destinations like Cookeville’s Red Silo Brewing Company offer our guests a point-of-interest showcasing the craft of our brewers and a taste of Tennessee.”

For a recap of the Tennessee Beer Run, go to: thetnbeerrun.com.

For more information about the Cookeville-Putnam County Visitors Bureau, go to: visitcookevilletn.com.