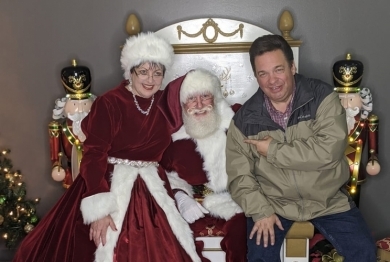 The Cookeville-Putnam County Christmas Parade has served as the official holiday kickoff in Cookeville for over 50 years.

Darren Wilson has attended every single one.

When not serving as real estate professional or chamber ambassador, Wilson is obsessing over Christmas. (His words, not ours)

He sat down with our Director of Communications, Allison Boshears, to talk all things Christmas Parade.

Allison: What is it about Christmas that you love so much?

Darren: I start playing Christmas music in my car from August to February, I keep my tree up that long too. In general, people tend to be more loving, kind, generous and family oriented around the holidays.

Allison: So you’ve been to every Christmas Parade..

Darren: Every single one.

Allison: Tell me about some of your favorite memories.

Darren: Man, we have had some of the best float entries through the years. In its early years, the parade would have big, automated floats that moved and were so interactive. I remember Tennessee Tech did a structure out of chicken wire with purple and gold tissues stuck throughout. We had everything from a Charlie Brown Christmas to a “Joy To The World” themed rotating globe.

Allison: Are there any memories of Christmas Parades past that stick out to you?

Darren: Probably the early days when I was a child, seeing these enormous productions that businesses and groups worked so hard on for so long. My family making the Christmas Parade a family tradition and now spending that with my children and grandchildren is what makes this event so special to me.

Allison: What is it like serving on the Christmas Parade Committee? Why do you do it?

Darren: The committee itself has grown throughout the years but I’ve always enjoyed the creativity of others. Being able to work with this team from the Chamber and area leaders is such a joy. To see the kids’ eyes when Santa passes, that’s what it’s all about. For those precious children, for them to be able to enjoy it, that’s why we do it.

This year’s parade will feature float entries from across the region displaying their best version of this year’s theme, “Christmas in Cookeville.”

The parade route begins at the corner of 6th Street and Washington Avenue continues to the square at Broad Street and on to the Cookeville Depot Museum.

The parade is presented by Ford-Lincoln of Cookeville, LiteRock 95.9 and 96.9 Highway 111 Country.

The parade will be broadcasted locally on WCTE and emceed by Chamber President Amy New and WCTE Radio Ready To Learn Radio Show Host Cindy Putman.